Home songs CHRIST, WHO IS IN THE FORM OF GOD 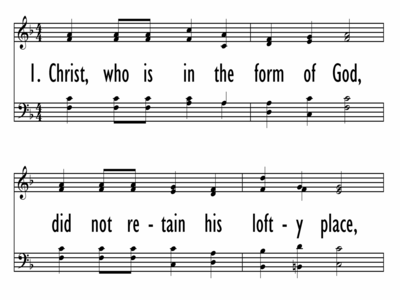 Christ, who is in the form of God

1 Christ who is in the form of God,
did not retain his lofty place,
but, taking on a servant's role,
became a member of our race.

2 And being found in human form,
humbly he suffered further loss
by willingly accepting death--
yes, even death upon a cross.

3 Therefore has God exalted him
and raised him to the highest place
and given him that matchless name,
worthy of all names to be praised;

4 that at the name of Jesus Christ
should every creature bend the kneed,
and every tongue confess him Lord,
to God's own glory endlessly.