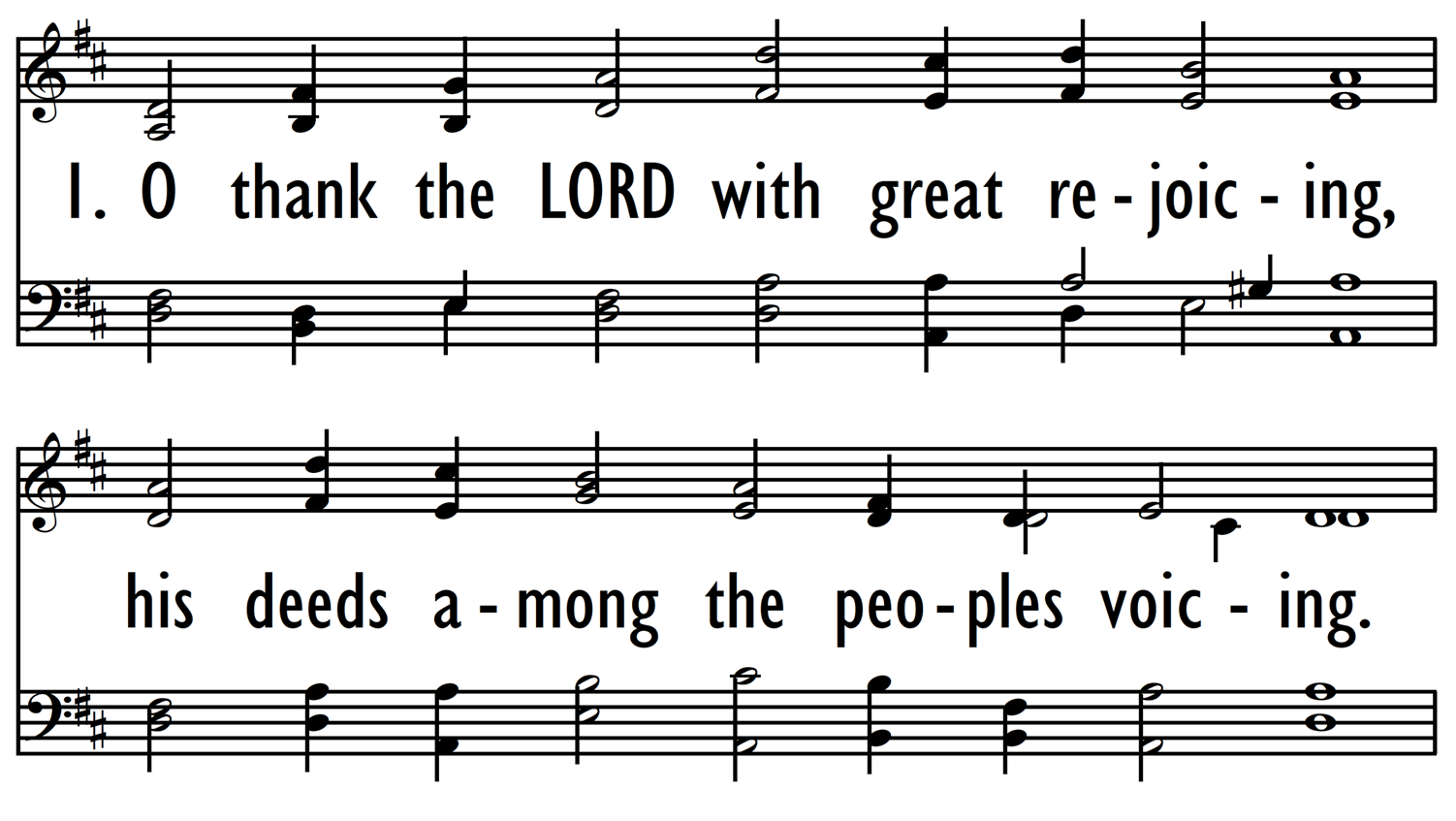 O thank the LORD with great rejoicing, his deeds among the peoples voicing.

1.O thank the LORD with great rejoicing,
his deeds among the peoples voicing.
Praise him, his wondrous works proclaim,
and glory in his holy name.
Let those who seek him praise the LORD,
their hearts exulting in his word.

2.Turn to the LORD, who fails us never,
and seek his face, his strength, forever.
Recall the wonders he has wrought,
the righteous judgments he has taught.
Remember these, you chosen ones,
O Abr’am’s offspring, Jacob’s sons.

3.He is the LORD, our God unfailing,
his judgments ev’rywhere prevailing.
He will remember and uphold
his cov’nant made in days of old.
The steadfast words of his command
a thousand generations stand.

4.Firm stands his word to Abr’am spoken,
his oath to Isaac, never broken.
His everlasting covenant
the LORD our God will not recant.
He promised Isr’el, “You I’ll give
the land where you as heirs may live.”

5.When few in number and neglected,
they by the nations were rejected;
they had to wander far and wide,
but God remained their faithful guide,
and kings he would rebuke and warn:
“Do my anointed ones no harm.”

6.Where Jacob dwelt among the nations,
God summoned famine and starvation,
destroying ev’ry source of bread.
But he had sent a man ahead,
that he his chosen ones might save.
This man was Joseph, sold as slave.

7.In Egypt he endured great anguish;
in prison he was left to languish.
His feet were bruised, with shackles chained;
his neck in irons long remained.
But when the LORD’s word proved him right,
he was delivered from this plight.

8.The king called Joseph and released him;
his prophecies and counsel pleased him.
He made him master of the land,
gave all he had into his hand,
to guide his princes on their course,
to show his elders wisdom’s source.

9.Then Israel with kin and cattle
went down to Egypt there to settle.
Rich blessings did the LORD bestow;
soon they were stronger than their foe.
Then God made the Egyptians treat
his chosen servants with deceit.

10.The LORD sent Moses as their savior
with Aaron, whom he chose to favor,
and through their words he wrought for them
great wonders in the land of Ham.
Though darkness covered it by day,
the foe would not God’s word obey.

11.To blood he turned both stream and river.
He all their land to frogs delivered;
they into inner chambers went.
Then swarming flies and gnats he sent.
Their fields and orchards hailstorms lashed;
throughout the land the lightning flashed.

12.Their fig trees and their vines were shattered,
their fields by swarms of locusts battered,
which ate their crops and all things green
till only barren ground was seen.
Then God in anger raised his hand
and smote the firstborn in the land.

13.With silver and with gold provided,
they went, by God their shepherd guided.
How glad was Egypt when they left;
of all its pride it was bereft.
God spread a cloud and gave a light
to point the way by day and night.

14.He gave them quail as they demanded,
and bread from heav’n on them descended.
Out of the rock God’s mighty handmade
rivers flow in desert land.
His promise, made to Abraham,
he kept and safely guided them.

15.God led them forth with joy and singing,
their voices with his praises ringing.
He gave to them the nations’ land,
filled with their fruit his people’s hand,
that they might serve him all their days.
O Isr’el, to the LORD give praise.