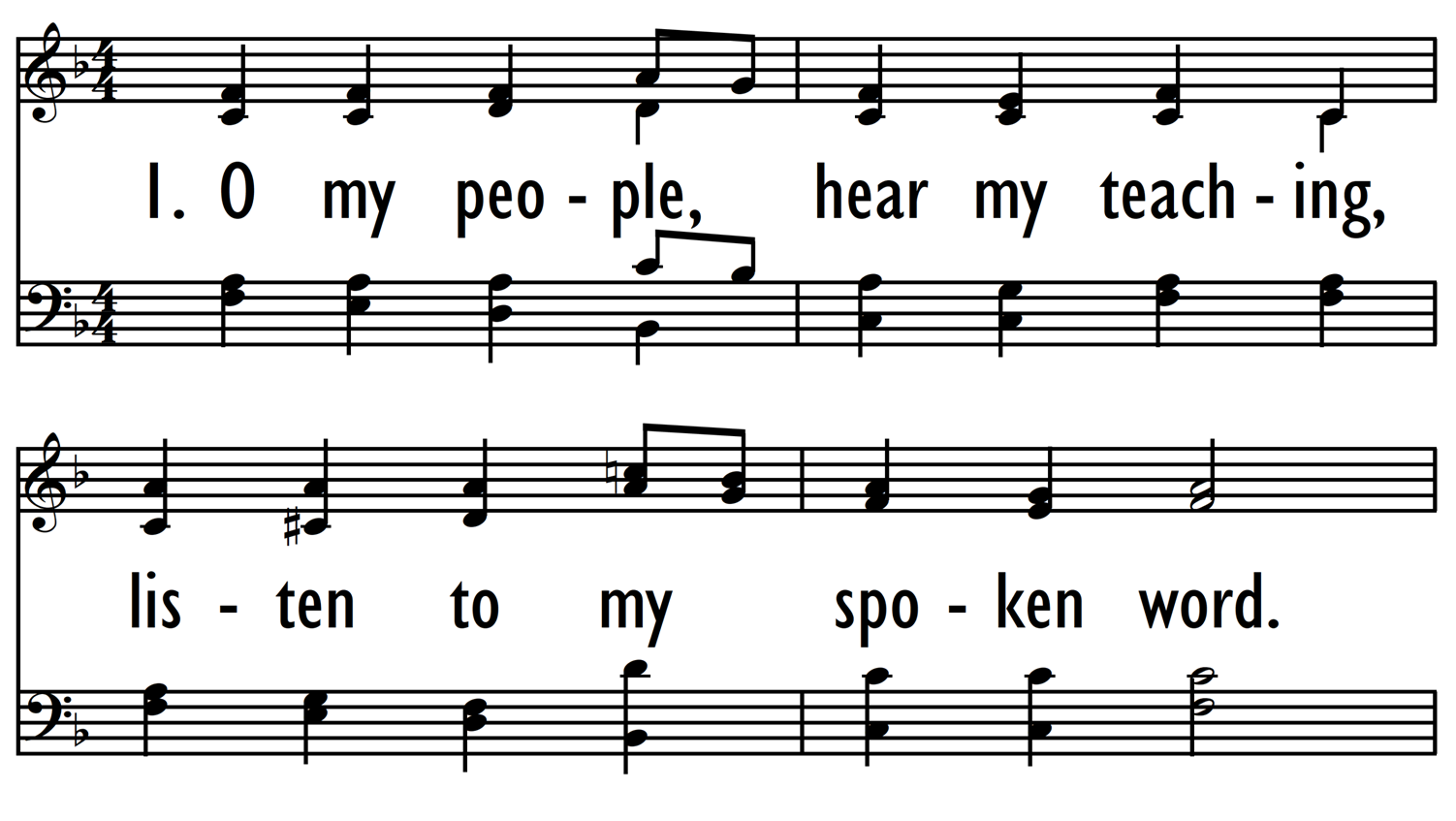 O my people, hear my teaching, listen to my spoken word.

1.O my people, hear my teaching,
listen to my spoken word.
Parables my mouth will utter;
old, dark sayings I make heard—
things our fathers have made known,
things that we’ve been told and shown.

2.We will hide not from their children
all the wonders of the Lord;
tell the coming generation
of his might and glorious works.
He in Jacob has ordained
laws that Isr’el must proclaim.

3. God commanded all our fathers
they should teach their sons his way,
so the coming generation
learn to know his laws, that they—
e’en the children, yet unborn—
rise and tell their sons in turn.

4.Thus may they make God their refuge,
ne’er forget his mighty works,
but should keep his good commandments;
not be like their fathers were,
who, with undevoted heart,
were unfaithful to their God.

5.Ephraim, armed with bow in battle,
turned back on the day of war.
They forsook God’s holy cov’nant;
they refused to keep his law.
They forgot what God had done,
all the wonders he had shown.

6. God showed wonders to their fathers
when in Egypt, Zoan’s land:
split the sea and led them through it,
piled the waters, made them stand;
led them with a cloud by day;
fire by night revealed their way.

7. God split rocks within the desert,
gave them drink as from the deep;
made the rock pour streams of water,
flowing down the rivers steep.
Yet they sinned against him more,
fought against the Most High LORD.

8.Craving food, they spoke against him,
putting God unto the test:
“Can God spread a laden table
in this empty wilderness?
From the rock he poured out streams;
can he give us bread and meat?”

9.When he heard, the LORD was angry,
filled with wrath that kindled fire,
burning Jacob in his fury;
Isr’el faced his rising ire.
For they trusted not in God,
and his saving pow’r denied.

10.Yet the skies above he summoned,
opened wide the doors of heav’n.
God rained manna down upon them,
grain of heav’n to them was giv’n.
Bread of angels man received.
God sent food abundantly.

11.He made east wind blow in heaven,
drove with pow’r the southern wind.
Meat, like dust, he rained upon them,
birds, like ocean sand, blew in,
falling down within the camp,
falling all around their tents.

12.Isr’el ate to satisfaction;
God supplied all they desired.
But before their mouths were empty,
God against them rose in ire.
He struck Israel’s youngest men,
killing all the best of them.

13. Still they sinned by not believing,
though they saw God’s wondrous ways.
So he closed their years in terror,
and in vanity their days.
When he killed them, then they turned;
for their God they greatly yearned.

14. They remembered their Redeemer—
God their rock, the God Most High.
But they flattered him with pretense,
filled their mouths and tongues with lies.
They were not sincere in heart,
from his cov’nant would depart.

15.Yet the Lord in great compassion
covered all their guilt and sin.
He did not destroy his people,
but restrained his wrath again.
They were flesh—how well he knows—
like the passing wind that blows.

16.How they grieved him in the desert,
ever ready to rebel—
vexed the Holy One and tested
God, the God of Israel!
They forgot his mighty deeds
when from foes he set them free.

17.They forgot God’s signs in Egypt,
marvels done in Zoan’s fields:
how he turned to blood their rivers,
so their thirst could not be filled,
sent devouring flies in swarms,
frogs which brought them ruinous harm.

18.God gave all their crops to locusts;
insects ate their labor’s fruit.
Hail he sent to strip their vineyards,
killed their sycamores with sleet;
slew their cattle when it hailed,
thunderbolts their flocks assailed.

19.God unleashed his burning anger,
wrath, displeasure, pain and woe;
sent his angels of destruction,
forged a path for wrath to go.
He spared not their souls from death;
plagues consumed their life and breath.

20. He struck down all Egypt’s firstborn,
firstfruits in the tents of Ham.
Then, like sheep, he led his people,
like a flock through desert land;
led them safely, unafraid,
but the sea their foes waylaid.

21. Then he brought them to the mountain,
holy land won by his hand.
He drove nations out before them;
he assigned to them their land,
gave them nations to possess,
settled Isr’el in their tents.

22.Yet they tested and provoked him—
God Most High, his word they spurned.
They were faithless like their fathers;
like a faulty bow, they turned.
With their shrines and deities
they provoked God’s jealousy.

23.When God heard them, he was angry;
he abandoned Israel.
He forsook his tent at Shiloh,
where he vowed with them to dwell,
let his pow’r in slav’ry go,
gave his glory to the foe.

24.God gave all his chosen people
over to the sword in rage.
Fire consumed their choice young manhood,
wedding songs were kept from maids.
Priests lay slaughtered by the sword;
widows had no tears to mourn.

25.As a man awakes from slumber,
like a strong man bold from wine,
so the Lord awoke to combat,
shamed his rivals for all time.
He rejected Joseph’s house,
Ephr’im’s tribe he did not choose.

26.But he chose the tribe of Judah,
took Mount Zion, which he loves.
There he built his holy temple
like the highest heav’ns above,
like the earth he made secure
on foundations ever sure.

27. God chose David as his servant,
took him from the sheep and lambs,
brought him out to shepherd Jacob,
Isr’el, God’s inheritance.
With an upright heart he led,
with a shepherd’s skillful hand.